The short URL of the present article is: https://myspecialfood.com/d7oPv

One of the most well-loved Sicilian pasta dishes has a strange nickname, Norma.

Why is it called Pasta alla Norma?

No, it’s not named for an old Italian nonna, rather it’s believed to have been renamed after one of the tragic operas by Vincenzo Bellini with the same name.

They say that a Catanian (someone from Catania, in Sicily) playwright, Nino Matroglio, exclaimed that the pasta dish was as much a masterpiece as the famous opera.

While the name Pasta alla Norma may be a bit odd, the flavors are not. The simpler name, Pasta alle melanzane e pomodoro tells you what you’re actually working with in the dish.

Tying together fresh Italian tomatoes, creamy and savory eggplant, and salty ricotta you end up with a dish that is perfect for any warm summer evening, or even to help you imagine one during the cold winter.

At it’s base, this dish is a simple tomato sauce, tossed with a short pasta (macaroni, penne, etc) and cooked eggplant.

Some people roast the eggplant, giving it an earthier flavor, but the traditional recipes stick to frying them in olive oil.

If  you do want to reduce the calorie count of the dish, instead of frying you can grill the eggplant slices, though it won’t be quite the same.

You also find a great deal of creativity with this dish when you leave Sicily, even to the point of including shrimp and other vegetables. This is not, by any means, necessary for the enjoyment of the dish.

As with most Southern Italian cuisine, simple is best. Just make sure you’ve found high quality ingredients and it is hard to go wrong.

How to Prepare the Eggplant

Most of us have bad memories from some eggplant dish that was gummy and bitter. Luckily, this is easy to avoid with a little extra preparation.

We recommend cutting up your eggplants according to the recipe, and then laying them out with a sprinkle of coarse salt for at least half an hour. This let’s them drain and significantly reduces the presence of any bitter flavors. Rinse off the eggplant and then pat dry so it’s ready for cooking (you want to avoid placing wet eggplant into oil to prevent oil splatters). 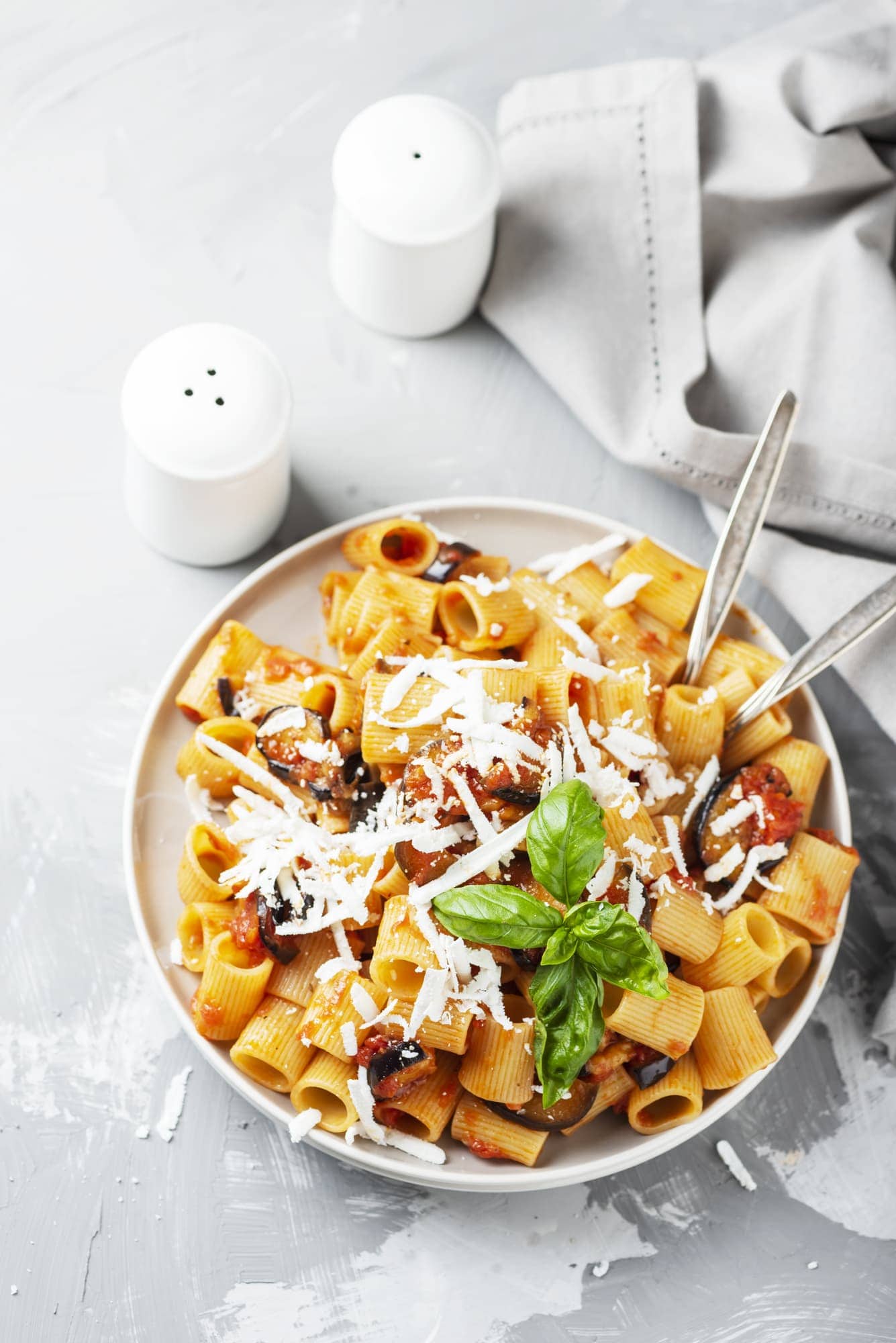 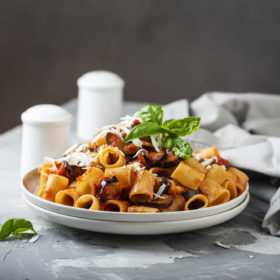 This is a bright and summery pasta dish, full of acidic sweet tomatoes and creamy eggplant. It goes very well with Southern Italian white wines, namely Falanghina and Greco di Tufo, or any unoaked Sicilian white you might find; an aromatic Sauvignon Blanc can be a great choice.

If you absolutely must have red wine, take a pass on the Chianti and instead grab a Sicilian red from the slopes of Mount Etna. You’ll find these under the Etna Rossa name, and they have a richness that will go nicely with the eggplant while having the acidity to stand up to the tomato sauce. Plus, it’s a wine from the region where the dish was created, that’s never a bad thing.

END_OF_DOCUMENT_TOKEN_TO_BE_REPLACED Parsley Pesto Shrimp Pasta Take your Shrimp Pasta to the next level with an easy parsley pesto sauce. This creamy, without the cream pesto sauce will have everyone asking for seconds. Ready in less than 30 minutes, and perfect for a family or company coming dinner idea. Every Italian knows

END_OF_DOCUMENT_TOKEN_TO_BE_REPLACED