The short URL of the present article is: https://myspecialfood.com/FhH9N

Few things are quite as relaxing as watching the sun start to set in mid-Summer while sipping on a crisp, effervescent cocktail that matches the glowing orange of the sky. In Veneto, they sometimes jokingly refer to this as spritz hour, and the reason for this is the Aperol Spritz.

Aperol is an orange-based Italian bitter aperitif, or amaro, that was introduced in 1919 in Padua. It is a low alcohol aperitif (11% abv), similar in strength to many of the white wines from Northeastern Italy but very different in flavor.

It has an older sibling of sorts in Campari, a somewhat similar but darker, more bitter, and more alcoholic spirit that was first produced almost sixty years earlier. Today, Aperol and Campari are made by the same parent company, the Campari Group, though originally, they were not.

What is the flavor of Aperol?

The mix of herbs and roots that combined to make Aperol’s distinctive bittersweet citrus flavor has also led to its characteristic bright orange color. The bittersweet flavor and low alcohol have made Aperol a very mixable amaro that is well suited to quenching thirsts on warm Summer days and early evenings. 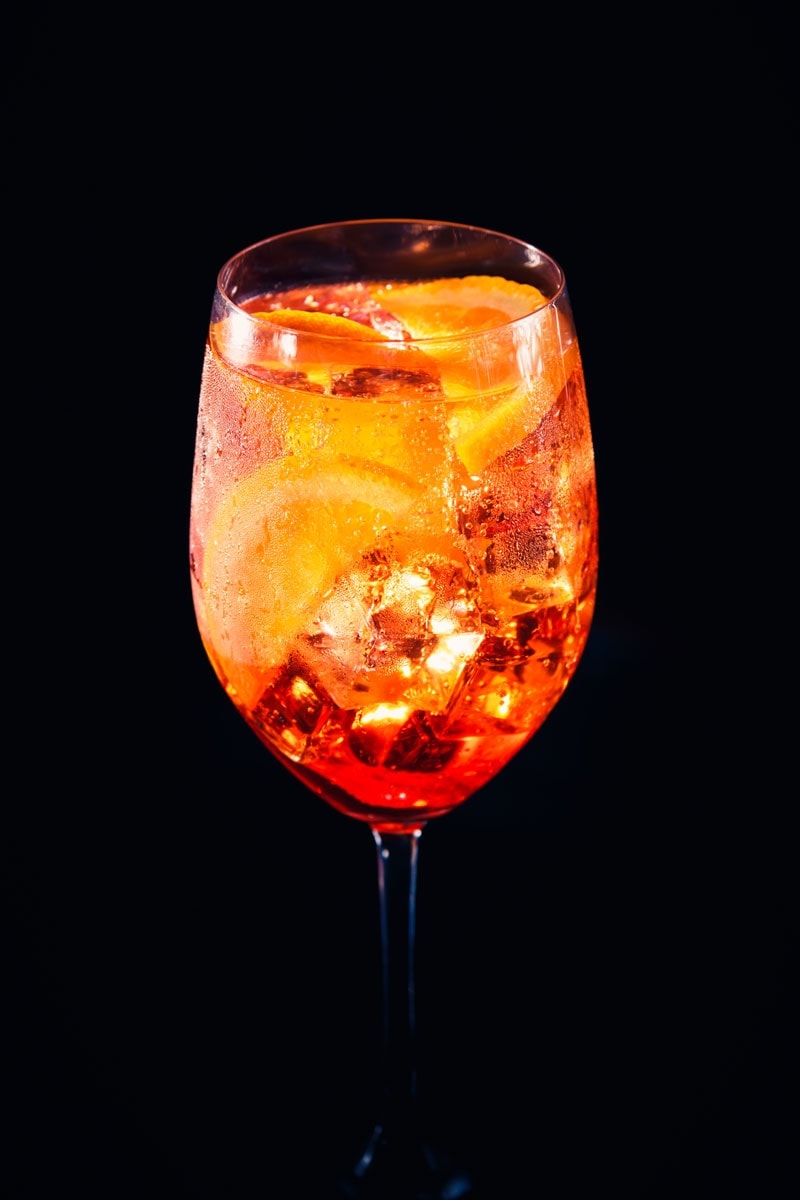 As the story goes, the name spritz was first given to very simple drinks made by Austrian soldiers in Northern Italy during the 19th century. As they were drinking wines that were unlike the ones made in their home country, they found themselves modifying them, most commonly by adding a “spritz” (German for spray) of water.

In the early 20th-century, soda water replaced still water, adding bubbles and lightness to the simple drinks. Next came the 1920s and 1930s cocktail scenes where both wine- and spirit-based bitter amaro aperitifs replaced the original wines, often to increase the alcohol content.

This was when Aperol was first used in a spritz, though it was still not quite the drink we now know. Prosecco was added to the drink much later and has become a crucial player in the success and popularity of the drink today by making it even more effervescent and easy to drink while retaining the bright and lively color.

Aperol Spritzes for Everyone!

With the addition of Prosecco to the recipe in the 1990s, the drink took on new popularity. It grew to become one of the most common summer cocktails in Italy after the Campari Group purchased the brand in 2003.

In the 2010’s, the Campari Group began a massive marketing push to increase brand awareness and market share outside of Europe, leading to goblets full of bright orange cocktails appearing on beachfronts around the world. If you walk past most bistros or cocktail bars on a Summer evening, you’ll see the immense success of this effort.

From Venice, Italy, to Venice Beach, you can find Aperol Spritzes being poured almost anywhere people want to relax at the end of the day with a bright and citrusy cocktail. I’ve seen them enjoyed from South Africa to Norway, and everywhere in between.

The appeal seems almost universal. Not bad for a 100-year old aperitif from Padua. 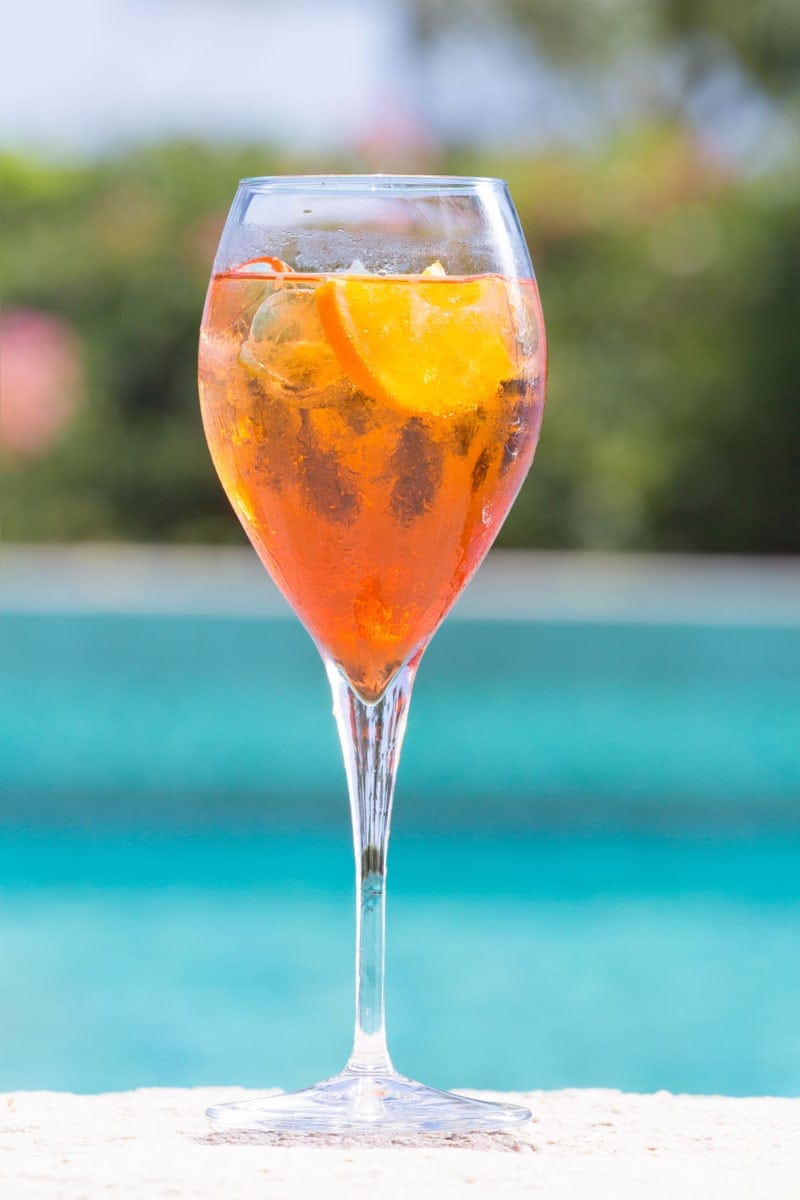 Although the Aperol Spritz is the big dog in the spritz category of drinks, it’s not for everyone. While most people appreciate the bright, citrusy flavor, some find it to be a little too sweet or want to try something different.

For these people, you can modify the recipe in any number of ways. Swap in a different amaro with more bitter elements, different types of sparkling wine (some recommend dry pétillant naturel or pét-nat), or simply using tonic water instead of soda water to finish the drink.

How to Make an Aperol Spritz

No matter what you choose for your components, the basic recipe remains the same: 3-2-1. Three parts sparkling wine, two parts amaro, and one part soda.

Keep this straight and you can come up with all sorts of refreshing summer cocktails, though you’ll probably have trouble overtaking the popularity of the original!

What to eat with them?

Although breezy summer cocktails don’t always need food to accompany them, it can make them more enjoyable. In Venice, they often serve “cicchetti,” or small plates with olives, ham, and small portions of other local dishes.

Any salty and savory antipasti dishes would work well, especially if done in bite-sized portions. Sfincione, Polpette, Taralli, and Focaccia are all fantastic options that can be easily prepared in advance and served in small portions to help keep both conversation and the drinks flowing.

A great summer cocktail party could be as simple as a bottle of Aperol, a few bottles of prosecco, some antipasti, and your friends and family. You don’t need anything more than that. 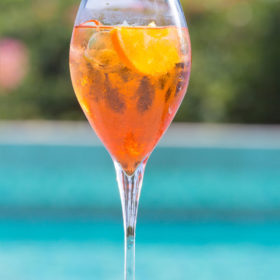 This is the quintessential Italian aperitivo drink, the one that you will find in every street in Italy. Easy and so delicious! Today we want to report a New Name in the Panorama of Italian Pastry, which from the Tuscany Region, more precisely Scandicci, proposes itself with skill and flair to the creation of splendid dishes. Her name is Irene Filograsso. You can view his exclusive creations and recipes here. Enjoy!

END_OF_DOCUMENT_TOKEN_TO_BE_REPLACED

Easy Italian Water Cake This Italian Water Cake is an easy soft and delicious cake recipe. No eggs, butter or milk necessary. One bowl is all you need. The perfect cake for a snack or even dessert. Or eat like an Italian and have a slice for breakfast! I loved